Very affordable for the organisation once funded and then it's self funding... 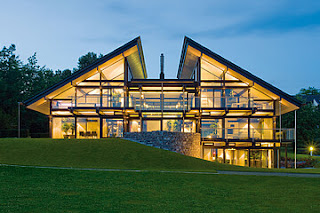 Similar to this except NN/YP bespoke

Why Are My dreams So Crazy…
I dream of Diamond shaped glass independent play facilities for the kids, with cinema seats with interactive controls for the big screen in front of them and catwalks for fashion shows, with television and broadcasting suites under the edge of the diamond that all link to each other across the country, that can also be hired out to make money for the kids too and a ten person contemporary serviced office above accessed from the other side that can be hired out to businesses on an annual basis to keep the Diamonds in the kids hands and to pay for itself, to adapt to change, to pay the bills, the surplus to fund head office of spaceshift. I see each one with a beam that can shine into the sky and on occasions we can have them all light up the whole sky and the whole country. Like the day of the Olympics. Yes what a change children with the power to be heard!
I see a £1.2 Billion Pounds Social Investors for the first few years only!
I see National membership of 12 million children.
I see new businesses invented by the kids and invested in by spaceshift.
I see my old landlord Community Housing Association apologising to me and them having the shops they were given by Camden Council to them free confiscated from them and being given back to me who paid for them, done them up and then had them robbed off me in a brutal court case!
I see International Development to establish an independent Youth Economy! This is because I believe the children who you too once were, are Gagged!!
I see a Youth Parliament Building, with high tech pods in a huge circle, representatives elected and being interactive from the circle as well as the country as the National meetings take place.
I see voting booths in the street designed for kids that are topical and instant.
I see a ‘Children’s Law Practice’ funded by the Youth Parliament to compensate victims and to lobby for changes in law with test cases being used.
I see a Youth Parliament SAS style military to combat child abuse.
I see a sentencing review, including witness protection for whistle blowers of the big boys who are making the money out of maintaining this old fashioned sub-culture, which serves to hide the old fashioned money making industry.
I see consumer training given to professionals by victims as to how they have social care so wrong and how it further abuses the majority and is self serving for the mental health institutions and the legal drug companies.
I see the launch of our own tracking satellite to ensure a confidential data cloud for communications that ensures personal accessible earth map and instant access to photographic and television evidence of kidnappers of children and can be accessed immediately by the Youth Parliament in emergencies.
I want many more parties, networking, exhibitions, art, design and beauty as I had for the past twenty years… because I like to dance and sing, help people meet up with each other that they may never meet and have fun with and be happy as many people do…
and I want it all..
Now!!
Posted by Mary Moss New NAYPIC / Youth Parliament at 08:38