Just got this through the post dated the 3rd April even though the deadline was 4th April and I faxed and posted the below ABC.. perhaps it was a bit sarcastic but really if anyone can fill out an application I think I can.. so.. it's all over... or is it... it ain't over till the phat lady sings.. Time for one brave MP to call for a public inquiry - Any political party - 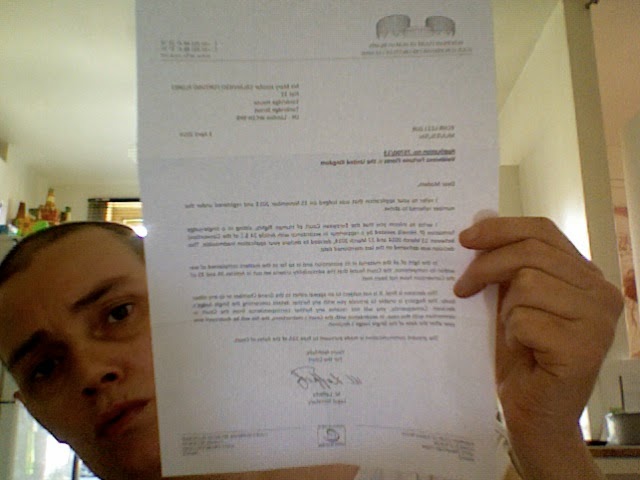 3rd April 2014 letter just sent in the post but deadline was the 4th April for all submissions.

I refer to your application that was lodged on 15th November 2013 and registered under the number referred to above.

I write to inform you that European Court of Human Rights, sitting in a single-judge formation (P. Hirvela assisted by the rapporteur in accordance with Article 24 & 2 of the Convention) between 13 March 2014 and 27th March 2014, decided to declare your application inadmissible. This decision was delivered on the last-mentioned date.

In the light of all the material in it's possession and in so far as the matters complained of are within it's competence, the court found that the admissability criteria set out in Articles 34 & 35 of the convention have not been met.

This decision is final. It is not subject to an appeal either to the Grande Chamber or to any other body. The registry is unable to provide you with any further details concerning the Single Judge's decision. Consequently, you will not receive any further correspondence from the Court in connection with this case. In accordance with the Court's instructions, the file will be distroyed one year after the date of the Single Judge's decision.